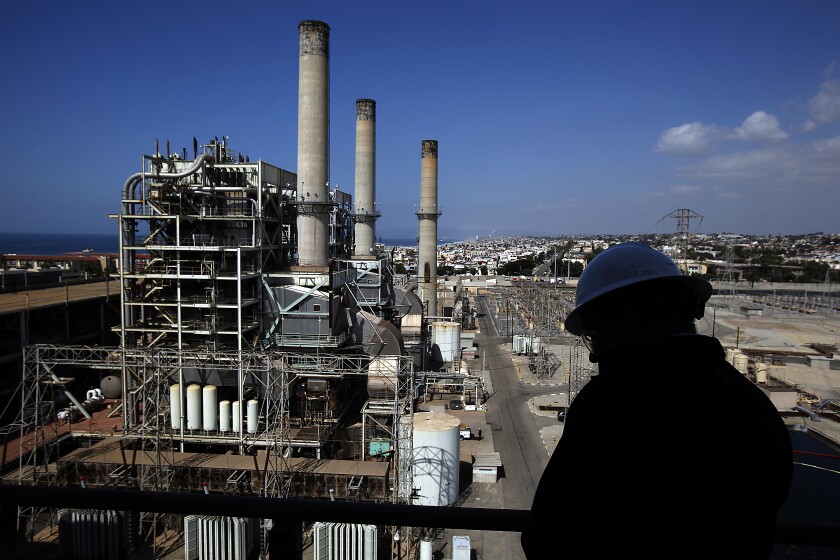 The long-awaited sale of 51 acres of prime waterfront real estate in Redondo Beach has been finalized — and it includes a commitment to shutting down the site’s gas-fired power plant, in the latest sign of California’s transition away from planet-warming fossil fuels.

Power plant operator AES Corp. said Monday it had closed on a sale of the land to real estate developer Leo Pustilnikov, in a deal that requires the company to stop operating the gas-burning generators by 2023. As part of the deal, Pustilnikov — who declined to disclose the purchase price — agreed to preserve as much as half of the site as public parkland, including several acres of coastal wetlands that were paved over decades ago.

But those commitments aren’t likely to end years of squabbling over the coastal power plant’s future. And they won’t diminish the challenge of fully replacing natural gas, California’s largest power source, with climate-friendly energy sources.

Redondo Beach officials want to see the local gas plant closed this year, not in 2023. AES was supposed to cease operations by Dec. 31, 2020, under a state policy requiring coastal energy generators to either shut down or stop sucking up ocean water for cooling, a process that harms marine life.

But the state’s Public Utilities Commission threw a wrench in the works in November, proposing to extend the closure deadline out of fear Southern California won’t have enough power on hot summer evenings.

The idea was to keep the Redondo Beach facility — and three other coastal gas plants — open for another two to three years, to give utility companies time to replace them with cleaner resources, such as batteries that can store solar power for use after dark.

Redondo Beach officials have urged the State Water Resources Control Board, which controls the fate of the four gas plants, to reject any extension for the Redondo Beach facility. The city won at least a partial victory this month, when water board staff recommended extending the plant’s lease on life by just one year, rather than two or three.

But the sale agreement between AES and Pustilnikov may put pressure on the agency to let the gas plant operate through 2023. 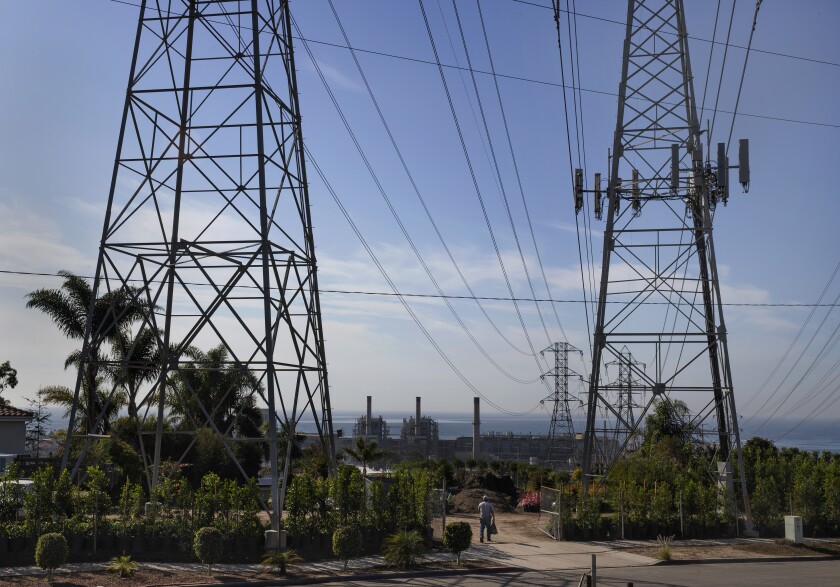 If AES is allowed to keep generating and selling electricity for three more years, the company will transfer $14 million to Pustilnikov for environmental cleanup — compared to just $6.5 million with a two-year extension, and $1.5 million with after a single year.

Similarly, Pustilnikov has agreed to preserve up to 25 acres as permanent open space — but only with a three-year extension for AES. With a two-year extension his commitment falls to 12 acres of open space, and with a single year it falls to four acres.

A longer extension would allow AES to generate more revenue from electricity sales, and in turn the company would provide more funds to Pustilnikov for site cleanup. The real estate developer and AES officials say the agreement benefits Redondo Beach, too, because of the big commitment to open space in the event of a three-year extension.

“It aligns the interests of AES and myself and the city,” Pustilnikov said in an interview.

Redondo Beach Mayor Bill Brand was far from satisfied. He thinks the power plant ought to close on schedule this year.

“It emits tons of fine particulate emissions, volatile organic compounds, nitrogen oxides and greenhouse gases every year it operates,” Brand said in an interview. “There are 21,000 people living within one mile of the power plant.”

Brand described the sale agreement — which also includes a commitment from Pustilnikov to offer 15 acres to Redondo Beach for $2 million per acre — as “far inferior” to the real estate developer’s previous offer, around a year ago, to sell the city 25 acres.

Brand is also frustrated that AES and Pustilnikov “want us to stand down on our opposition” to keeping the plant open past 2020.

“We’ve been fighting to close this plant for over 10 years,” he said. “We’re going to continue our opposition to any extension.” 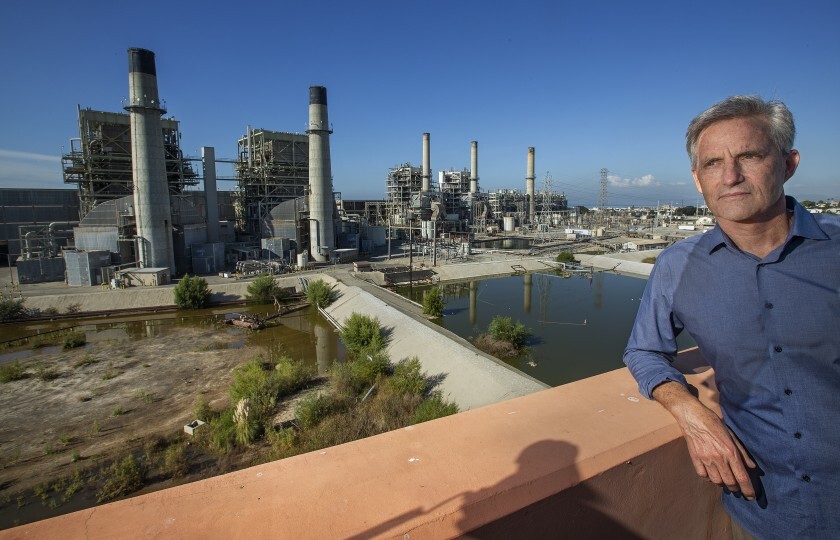 The State Water Resources Control Board is accepting public comments through May 11. Agency staff has recommended a one-year extension for Redondo Beach and three-year extensions for gas plants in Huntington Beach, Long Beach and Oxnard.

Whatever the state water board decides, natural gas faces a bleak future on the California power grid.

Gas accounted for about one-third of California’s electricity in 2018. It emits less planet-warming carbon dioxide than coal when burned, but it’s still a fossil fuel that contributes to sea level rise and worsening wildfires, droughts and heat waves.

State lawmakers have set a target of 100% clean electricity by 2045, which will probably require a total or near-total phaseout of gas.

Low-cost solar and wind power are already putting some gas plants out of business. But solar and wind farms generate electricity only when the sun is shining or the wind is blowing, and lithium-ion batteries probably can’t fill all the gaps. It’s not yet clear which technologies will ultimately get California the rest of the way to 100%, although there are several potential options. 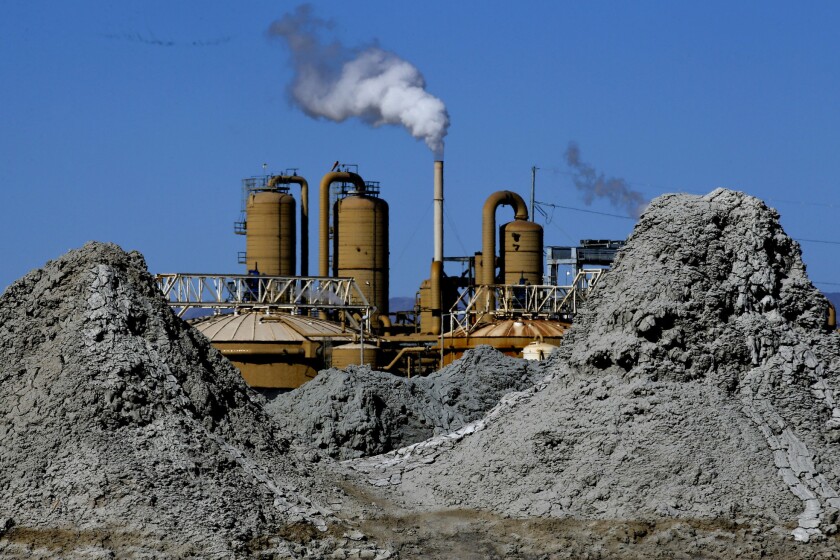 The debate over Southern California’s coastal power plants illustrates the challenge of quickly pivoting away from gas.

Los Angeles Mayor Eric Garcetti made headlines last year when he announced the city would close three seawater-cooled gas plants. But L.A. still plans to operate two of those facilities through 2029 as it figures out how to replace them with clean energy.

As for the privately owned gas plants in Huntington Beach, Long Beach, Oxnard and Redondo Beach, state officials want to see them shut down as soon as possible — but only when they feel confident the closures won’t raise the risk of power outages.

Lisa Krueger, president of AES United States, said the COVID-19 pandemic highlights the importance of a reliable power supply — and of continuing to operate the Redondo Beach gas plant a few more years, if that’s what state officials determine is needed.

“Just think how important it is in terms of keeping our electric service on so we have clean water, so we have hospitals,” Krueger said in an interview. “Having these plants available is a really good insurance policy to make sure the lights stay on.”

At the same time, Virginia-based AES says it’s planning for a future dominated by cleaner power sources. The company is installing lithium-ion batteries at its gas plant in Long Beach, and is slowly transitioning away from coal in other parts of the country. 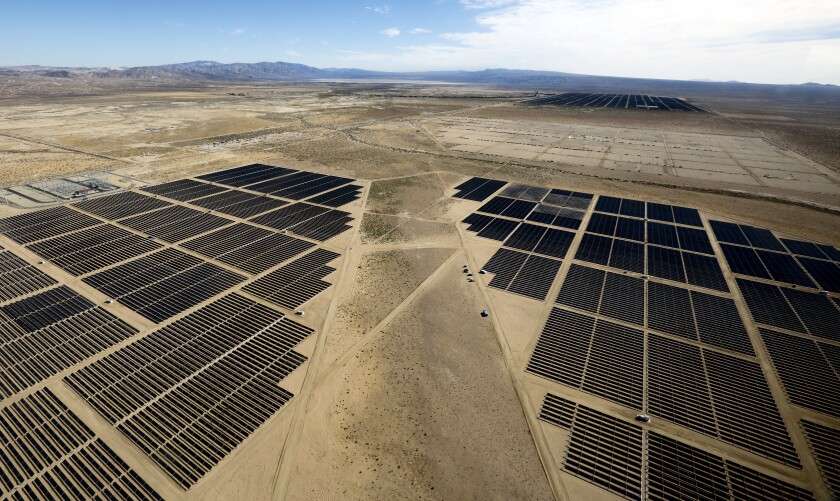 A solar farm in Kern County, Calif., supplies the Los Angeles Department of Water and Power. The state is edging away from its reliance of fossil fuels to generate electricity.
(Mel Melcon / Los Angeles Times)

Pustilnikov has big plans for the Redondo Beach gas plant site, and for surrounding land that he also owns. He hopes to build a corporate office campus as well as retail and commercial space, possibly including a hotel and hotel-branded residences. His vision includes repurposing some of the oldest power plant buildings into a food hall similar to New York’s Chelsea Market.

“Where else could you get 51 acres on the water?” Pustilnikov asked.

Still, he knows it won’t be easy. Redondo Beach voters must approve any redevelopment plan, a requirement that has torpedoed past proposals that Brand and other critics said would have allowed for too much housing or commercial space along the waterfront.

The public vote gives Redondo Beach officials leverage of their own as they continue to oppose a power plant extension.

“You know how when you go to a Broadway show there’s the first act and the second act? This is just the end of the first act,” Pustilnikov said. “I’m sure the redevelopment will be just another saga that will take as long, if not longer.”

Thank you for contacting us, we'll get back to you shortly.

Sorry, we are unable to send your message at the moment. Please try again later.